I hope you’ve had a great weekend so far. It’s the time of the week where I post a more detailed description of the makeup looks that I have done through the week. 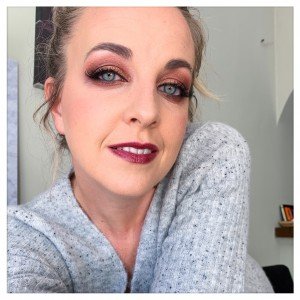 The first look is an autumn inspired look, I have used darker colours but still with some sparkle in it. A lovely everyday look! To create the eyes I used the Bibbz signature eye palette from CAIA cosmetics. I started off with “tokyo” as a base shadow all over the lid and in the crease, “milan” was added in the crease, inner corner and the outer corner. To lighten up the lid I applied “new york” and blended it in to the other shadows and to create some more depth i added “paris” in the outer corner. “Milan” and “paris” are both blended in to each other under the eye with “new york” in the inner corner. For the eyeliner I’ve only used an eyeshadow, and it is “marrakesh” from the same palette, i applied it with a thin brush on the upper lid and blended it in softly under the eye. Last but not least I used “london” to highlight the brow bones and to blend the other shadows so there are no hard lines. For the base I have used the studio fix fluid foundation from MAC cosmetics, I set this with blotting powder “porcelain” from Make Up Store. The blush is “sand” and “flower”, also from Make Up Store. For the lips i used the fantastick lipstick “garnet” from Linda Hallberg Cosmetics. 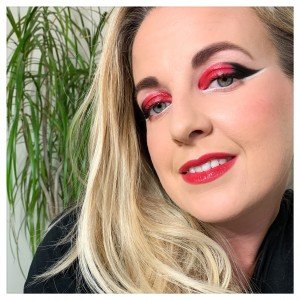 Second look this week is not really a look you’d wear everyday, it’s more of a creative and fun look. I actually asked my son Atlas to say three colours that I should use, so he chose his favourite colours: black, white and red. Another great thing with this look is that I’ve used the same product for both eyes, cheeks and lips. Multifunctional products are always fun! So to create this look I started with the eyeshadow “fornax” from Linda Hallberg cosmetics infinity deep palette in the outer corner. I used a small angled brush to draw the outline and then filled it in with this eyeshadow. After that I added fantastick lipstick “bullseye” from Linda Hallberg Cosmetics on the rest of the eyelid. This is the product I used on cheeks and lips as well. The white details are made with the core crayon “white core” from the same brand. The base is the same as the first look but here I’ve also used Kat von D’s shade & light palette.

I hope you like these looks and that you’ve got some inspiration from them! Enjoy the rest of your weekend and have a fabulous week!